Thank you to the Elkhorn Hills UMC NUMB riders and donors who helped raise money to fight hunger around the world.

NUMB donates $65,000 to battle hunger in Nebraska, around the world 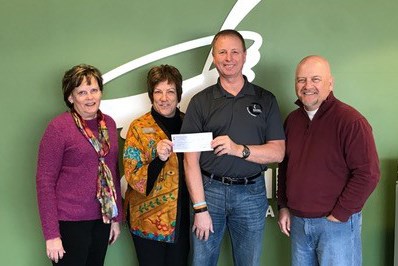 The Nebraska United Methodist Bike Ride for Hunger (NUMB) recently distributed $65,000 in donations raised from its 2016 ride.   Of the money distributed locally this year, totals included:

Checks sent to the General Board of Global Ministries included:

The Nebraska United Methodist Bike Ride for Hunger is a benefit ride that aids  local and world hunger projects, including Heifer International, Nebraska Food Bank, Bread for the World and UMCOR:  Nigeria.

NUMB was co-founded by Rev. Bill Ritter (former pastor of Elkhorn Hills United Methodist Church) and Greg Bakewell who were both avid bike riders.  Reverend Ritter came up with the catchy name and Greg came up with the idea to make the NUMB ride more biker-friendly.  He created a circular route with daily travel totaling roughly 65 miles.  To date, all 93 Nebraska counties have been included in the route.

Elkhorn Hills has a solid history or support for the NUMB ride.  Members participate by serving in leadership positions, riding, or providing SAG (Support and Gear) service.  Elkhorn Hills Will Bike For Food!

NUMB 2017  In its 22nd year of fighting hunger, the Nebraska United Methodist Bike Ride for Hunger (NUMB) has given over $854,000 around the world for those in need.  We are calling NUMB 2017 the “Saddle Up” tour as the ride will pass by many acres of cattle being finished for market.  We ask you to Saddle Up your bike and start this ride in Wisner, Nebraska, home of very large cattle feedlots and journey to Albion.  The next day we head north to Plainview and then east to Ponca, home base of the Froggys.  From Ponca we turn south and return to where we started in Wisner.

The official start of NUMB 2017 is the Saturday evening Rider’s Meeting on June 24th, but for those arriving early to Wisner there will be an optional pre-NUMB loop ride on Saturday morning, This will be a short warm up ride in the area before the actual NUMB ride starts on Sunday morning. Camping will be available in Wisner both Friday and Saturday evening.

NUMB is open to all interested cyclists. You do not have to be United Methodist to participate in NUMB. The ride will be limited to the first 150 riders. Riders in the past have come from all across the nation as well as Nebraska to be a part of this ride.  Riders 18 years old and under must be accompanied by an adult, parent or guardian. NUMB will be challenging and riders must be in excellent riding condition and using quality biking equipment. Helmets are required. Participants must pay $55 for registration (after April 14th ‑ $60) and secure a minimum of $100 pledged to United Methodist Hunger programs. Registrants will receive pledge sheets and information about United Methodist Hunger projects upon registering.

Cyclists need to provide their own tents, multi-speed bike and gear needed for the trip. Helmets are mandatory. Following registration you will receive additional information including helpful hints on training and equipment.  The route is SAG supported. Nebraska Cycling & Fitnesss of Columbus will be on hand for repairs and parts. Designated camping sites are provided in each host community. Our NUMB Semi will transport your tents and luggage. Riders will park their vehicles in Wisner on arrival and pick them up again when our tour concludes. If you elect to stay in a motel on the tour, it is your responsibility to get to the motel with your gear and back to the campground.